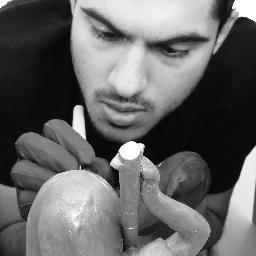 Valentine’s Day is all about chocolate. I might be all about Indian food, and even more so about mithai of all shapes, sizes and types, but I’m also the type who has to keep anything created from cocoa under lock and key lest it find its way into my greedy gob.

So when I come across a chap who claims to fuse the two things that get my heart racing faster that a vintage hot shot of SRK, I’m floored before Cupid’s arrow even leaves the bow. I’m not the only one – in his incarnation as ‘The Chocolatier‘, Aneesh Popat has gathered a lot of admirers.

Don’t get me wrong, he’s fair enough of face. But the attraction is down to what this man does with his hands. I’m pretty quick to flash the double-thumbs up to anyone who makes such a fine fist of fusing East and West, particularly when he makes chocolate (practically) calorie-free.

Let’s not romanticise the awful truth. Chocolate makes you fat; piling on the pounds as it provides the pleasure. Butthese truffles are water-based, letting you tuck in whilst tightening your belt… or at least, not needing to loosen it.

The lower-calorie lark came as an unexpected benefit. Aneesh’s initial aim was simply to showcase every last flavour in his carefully-combined ingredients. Doing away with dairy had the desired effect, with the super side-effect of reducing the caloric value by almost half.

Which sends you swooning? A piece of fruit, or a salted caramel ganache truffle? I’ll wager it’s the latter; and no matter – one of The Chocolatier‘s crams in no more calories than the average apple. And surely ‘five-a-day’ has no part to play on Valentine’s Day anyway?

Especially not when The Chocolatier offers something altogether more mouthwatering in terms of ‘fruity little numbers’ – rose, orange and cinnamon truffle, anyone? The awesome alchemy of Aneesh’s academic background and culinary creativity makes for precise products that offer precisely priceless indulgence.

The Valentine’s Collection might be meant for sharing, but that doesn’t make it easy to do so. You might just prefer to play for keeps; mooning into a mugful of rose petal drinking chocolate, snapping bits off a saffron and hazelnut slab, and letting a praline-filled chocolate heart melt yours.

In Aneesh’s own wise words, ‘Chocolate can make your day, take you to another world full of blissful moments and even give you the feeling of love – as proven by experiments undertaken at Harvard University’.

Science says it’s so. So word to the wise – go ahead and address that cocoa craving with a completely clear conscience.