Fifth Dimension Chocolates‘ perpetually-smiling founder Russell Pullan could easily be the poster boy for career change. After two decades in media-land, chocolate came a-calling, and Russell never looked back. Entirely self-taught, his wares have earned 5D a fair few accolades in the two years since the company’s inception – with awards afforded by such weighty industry deities as the Academy of Chocolate and the Great Taste Awards.
Where fine food is concerned, the small business start-up sector seems to attract the sort of individuals who’d rather give their peers a hand up than a trample over them to get to the top; focused less on rivalry and more on getting their heads together with fellow makers for mutual benefit. Fifth Dimension exemplifies that ethos – most recently, through a chocolate collaboration with condiment producer Dips; the result of which was the shiny new ‘Nadiad’ lemon chutney chocolate.
Like many of Russell’s truffles, this creation is named for a city – a nifty little concept skillfully showcased in Fifth Dimension’s best-selling, recently-revamped Journey Box; a globetrotting chocolate collection that helps the eater embark on a world tour as they taste. Flavours are bold, enunciating themselves clearly as you eat each treat. Yes, some are weird, but I’ll bet you’ll find them wonderful. 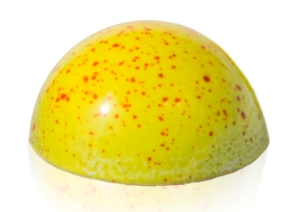 A word to the wise – not every chocolate you should sample is in that Journey Box – so you’ll need to go the extra mile and snuffle out the truffles elsewhere in 5D’s range. One such number is ‘Meaux’, made with wholegrain mustard, the creative catalyst for which was Russell stirring mustard into the gravy for a Sunday roast – simple action resulting in perhaps one of Fifth Dimension’s quirkiest creations. It’s not just novel; it also won hearts and earned stars at the Great Taste Awards.
Our own capital city, meanwhile, lends its name to the Journey Box’s full-bodied ‘London’ stout caramel – a treat that’s equal parts buttery and bittersweet, and wowed the Academy of Chocolate Awards judges sufficiently to snare it a Silver. Those who like that one will love the equally-umami ‘Hong Kong’, in which a sprinkle of soy sauce serves to enrich a caramel filling, lending an almost sherry-like, raisin-y depth.
Asia is the inspiration for a fair few of 5D’s chocs. Yuzu pairs up with pink peppercorns in ‘Kagoshima’; the intriguing candied citrus flavour of the former enhanced with the floral prickle of the latter in a Japanese-y chocolate that’s easy peasy to enjoy. Just as pleasing is the Vietnamese ‘Hanoi’, featuring lemon and ginger captured in caramel. ‘Bangkok’ rocks mango and passionfruit flavours and proudly bears a 2015 International Chocolate Award.

There’s even an Asian persuasion as Fifth Dimension makes its way to the good ole US of A – the ‘San Francisco’ chocolate references the Chinatown of the cosmopolitan city through mandarin and star anise. Raspberry Chambord ‘Orleans’ is just as beautifully fruity, whilst ‘Boston’ is a chocolate that’s nutty in every sense – happily offbeat, combining peanut and raspberry just like the sandwich that’s a American lunchbox favourite. You won’t get a bite of the Big Apple in the Journey Box, but you will within 5D’s wider range. ‘New York’ lives up to the eponymous city’s nickname; a tang-tastic apple calvados caramel whose flavour is as bright as the lights in Times Square.
Back in the Journey Box, things go south. Not in terms of quality, you understand, but in terms of geography. ‘Popayan’ is a dark chocolate, honey-laced, two-region truffle tribute to Columbia, a country whose cocoa captured Team 5D’s heart and one where the company has planted its own trees; anticipating the first cocoa crop in 2018.
‘Genoa’ is the Italian sophisticate of the bunch; a multi-award-winning, glossy green-and-yellow gemstone of a choc, filled with bunches of own-grown basil and lifted with lemon. It might be every bit as ridiculously good looking as Zoolander, but one has to suspect that 5D’s ‘Paris’, in its noble robe of orange and yellow-streaked white chocolate, would offer a typically-haughty Gallic ‘bof’ as it shows off its very own Champagne and Grand Marnier filling. 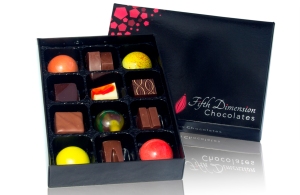 The 5D adventure doesn’t stop with the city-citing chocolates. Far from it. As a man with an appetite for innovation, Russell rustles up new inventions on a regular basis. Cocoa nuts who love culinary curios won’t be short of new treats to meet; from the ‘Chocwich’ which sandwiches a soft mallow or pâte de fruit filling betwixt a pair of chocolate squares right through to the citrus-laced, nubbly, nutty rocks that go by the name ‘Salmoran’.

If the end of summer has made you sad and your next holiday is a while away, make Fifth Dimension your first choice tour guide and rove the globe in a vicarious and thoroughly delicious manner: through top-notch chocs.

7 responses to “Fifth Dimension – chocolate from an alternative perspective”