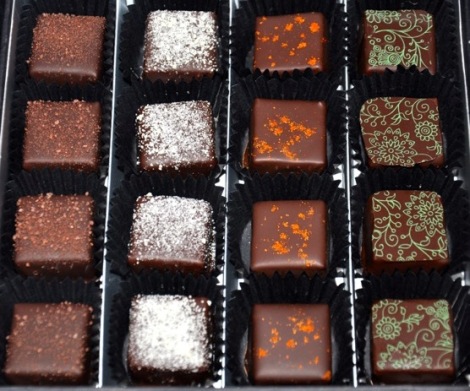 As you’d hope and anticipate from an industry whose business is based around such a delicious commodity, the chocolate world is populated by many lovely characters. It must be all those extra endorphins that enthusiastic cocoa consumption releases. After a virtual introduction to chocolatier Matthieu de Gottal by ‘chocolate enthusiast’ and budding bean-to-bar-ista Hazel Lee, I finally met the man in the flesh – and in good spirits, celebrating a pair of Bronzes at the Academy of Chocolate Awards party.

We might have merrily quaffed fine fizz together, but it was always going to be risky presenting me with anything involving whisky. As I confided to me new friend, the strong spirit doesn’t sit too well with me, be it at the peaty, smoky Islay end of the spectrum or a lighter, TCP-and-iodine incarnation.

Mr. Gottal might have got the picture, but luckily he didn’t let me get away with not sampling something from the box of chocs he had to hand – an offer that proved all-too temping, even if they were all whisky-laced. I cautiously chose a truffle inspired by honey, oat, and cream-laced Scots drink, Atholl Brose – reasoning that it would pose me less of a problem than a straight-up spirited number.

And, lo!, it was lovely. And my enthusiastic response prompted Matthieu to send me a selection; convinced he could win me over to whisky with his collection of carefully-composed ganaches, all enrobed in Chocolaterie Robert Madagascar 70% Organic chocolate.

Designed with India in mind

The duo of Indian-esque inclusions in this choc box fuse whisky and spice; it would suffice to say the combo is a winning one, but that succinct statement just wouldn’t do justice to two of Matthieu’s most glorious creations.

The rich, dark coating of ‘Salty Fennel’ gives way to a ganache with an almost cake-like flake, a bit of bitterness, and plenty of fennel flavour which immediately dominates with its slightly nutty, sweet anise flavour. The subtle salinity is well-judged; just enough to enhance the experience. Then that spice re-emerges for a second, more herbaceous hurrah as the whisky notes emerge, framing the fennel rather than competing or overpowering.

Matthieu had always wanted to make a chilli chocolate – but ‘not just for the sake of it’; not until he found a dram that delivered flavour to flatter fire. A single sip of Amrut Fusion convinced the chocolatier that the Indian whisky would work perfectly, boasting, in his own words, a ‘mellow, peaty flavour with rich fruitiness and notes of dark chocolate, spices, confit oranges, and oak’.

Combining fruity Kashmiri chilli, Venezuelan 55% milk, and Ecuadorean 72% dark chocolate, this truffle is rendered a contender for ‘top of the chocs’ in my affections. Sweet red berries and cherries and a light astringency get one’s nostrils all a-twitch, before a bright burst of heat is released as a boozy bonfire builds deliciously, deep down in the throat. A slight smokiness wraps itself around sweet-sour dried cherries, and the Amrut offers a festive, fruity flavour that’s almost akin to dark rum. The ganache bids a fine farewell with a dreamy, creamy finish.

Over the sea to Skye

Matthieu understands that even a spot of seasoning can completely change one’s organoleptic impressions of a product, and his two Talisker-spiked truffles offer the perfect illustrative example. The descriptions for both scan similarly; Papaousie 35% milk chocolate water ganache with Talisker 10 – but one is additionally peppered with a touch of Isle of Skye salt. The difference is remarkable.

The un-seasoned ‘Skye Stream’ is a slow-burner; first fruity, kept clean with coaltar soap. It evolves into something sweeter, even honeyed; fuller, heavier and smokier. The cocoa-driven finale finally dies down, leaving whisky’s lingering warmth – the entire experience is as nuanced and complex as sipping neat spirit.

By contrast, ‘Salt of Skye’ opens up immediately, yielding a sweet, delicious fruity-citrussy chocolatey aroma with a barely spiritous scent. In the eating, the burst of bright green cardamom brings India to mind; combined with fresh cream. It’s marvellously mellow, with a long, slightly nutty and incredibly creamy finish and welcome whisky warmth. The salt serves to enhance every element, yet doesn’t shout about its presence.

My verdict? Both are beauties, but to my mind, this Skye-style specimen is best taken with a pinch of salt.

‘Indochine’ is Matthieu’s personal favourite – but if you’re not willing to take his word on its wonders then perhaps a Bronze Award from the fine chocolate aficionados at the Academy of Chocolate will convince. As may my own expression of deep, deep bewitchment with this truffle. Combining Glenfarclas 105 with Vietnamese 65% dark chocolate leads to an aroma that’s very fruity, sweet, slightly smoky, and jammed with morello cherries. In the mouth the ganache melts into something warm and smooth, with a low ‘burn’ and fruity acids that are rounded, not angular, smoothed still further by a creamy finish with a touch of tannin.

The pretty, green, almost William Morris-esque pattern atop ‘Sweet Peat’ lends this truffle instant eye appeal – but the true beauty is revealed only in the mouth of the beholder; hinted at in the big, full tobacco-and-old-leather aroma with complex notes of sweet wood and ocean brine. The Laphroaig 10YO in the Amadei 34% milk ganache unravels both fully and softly with no burn; from sweet and creamy through to coaltar soap and pleasingly bitter, tannic sensations – and do I detect bit of leathery mushroom on the end?

A’Bunadh Blanc and its Noir counterpart are as different as day and night. The former is identified by a small sprinkle of desiccated coconut, and accordingly, a corresponding aroma. Employing Venezuela ‘Icoa’ 34% white chocolate, the ganache is nowhere near as sweet as one might expect but every bit as creamy as you’d hope. The flavour verges on the herbal, lacks, and the Aberlour A’Bunadh whisky only raises its voice above a whisper after the third nibble or so – announcing itself with a bright, citrussy warmth.

Then storms in the big, bold A’Bunadh Noir and its lit-cigar-meets-bacon aroma. Aberlour A’Bunadh is strident here –  leading with a slightly-softened coaltar soap flavour which persists after the ganache’s initial sweet, fruity burst dies back. The cocoa and rich cocoa butter notes of the Madagascan Organic 70% dark  and 72% dark chocolates in the ganache provide a gentler, haunting finale.

And then we come full circle with ‘Atholl Brose’; the first De Gottal truffle I tasted back at the AoC Awards. A simple blend of Madagascar 70% Organic dark ganache with Glen Moray 12 year-old somehow manages to capture all the complexity of the traditional Scots drink-cum-dessert. This one begins with bread: a spirited, almost sourdough rye toast scent. In the mouth, sharp fruit bursts forth, surfing a wave of whisky then segueing into something more mellow with a long, round, full-cream finish and a breath of smoke.

Feel like you’ve died and gone to heaven? Now Meet your Maker…

So, just who is this Matthieu; besides a highly spirited fellow and whisky wizard? The Cotswolds-based, Belgian chocolatier is a one-man band who is keenly committed to his ethical approach. When choosing couverture, he opts for bean-to-bar products not solely for flavour but also ‘because of the social ramifications. It may not be perfect, but it is better.’ Matthieu’s enrobing chocolate of choice, and the one that’s helped create his signature style, is an Organic Madagascar 70% from Chocolaterie Robert – a company whose ‘Raisetrade‘ model enables locals elevate their own economy.

Like me, Matthieu has two all-consuming obsessions. Like me, one of those is chocolate. But instead of Indian food, his mistress is whisky. He also likes to get frisky with herbs, spices, and other alcoholic tipples – using gin, rum, and beer in his chocolates; the latter combination even inspiring the Egghead Brewery to fling a few cocoa beans into a newly-created milk stout entitled ‘Ermintrude‘.

Each from-scratch small batch numbers just 250 chocolates, with Matthieu’s meticulous production process taking a full four days from start to finish. To say that each and every truffle is testament to time well-spent is fact, not flattery. It’s probably high time you tried them for yourself.